Today, the technical advancements in bows is impressive. We will cover the wide array of types of bows, but the long history of archery is reflected each new model.

Traditional – Self Made Bows

A traditional bow is generally primitive and self-made from a single piece of wood. Some cultures also made longer bows by wrapping two pieces of wood together. These types of bows can be made from several types of wood depending on the region. Some traditional bows can have extreme range and lethal force, but it is largely a lost art today – at least in terms of high performance bows.

Longbows are widely manufactured today, but they are the closest version to the primitive, traditional types of bows. They have a simple design. It is one long piece of wood with a gentle curve. Longbows lack arrow rests, sights, or modern advancements. They are more challenging to aim, shoot, and master, but they are still immensely popular for their primal charm. Most are made from wood, but some are made from metal, polycarbonate, or other synthetic materials.

There are 2 kids of longbows: D Flex and Reflex. The D Flex is shaped like the letter D. The limbs of the bow follow the same gentle curve. This produces less power and range, but it easier to use with lower draw weights generally. 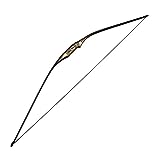 Many longbows made today are reflex bows. They have a slight curve added to the limbs of the bow. It looks more like a shallow, rounded letter W. The added curves create more force adding range and accuracy. 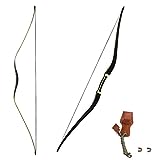 Currently, these types of bows are hugely popular. They have some more technical advancements, but they are still close to the design of primitive bows. They are a sort of mediation between the primal traditional bow and the higher tech compound bows and crossbows. There are 2 construction types of recurve bows: fixed and take down.

The fixed recurve bow is made of one solid piece. Their weight is typically lighter than the take down models. This makes them easier to carry and use which is better for those who hike before a hunt or shoot. 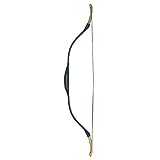 The take down bow is made of 3 pieces: 1 riser (handle) and 2 limbs. The limbs can quickly and easily be added or removed from the riser. This makes them easier to store and transport. A broken down recurve can fit in most backpacks, for example.

These types of bows were created in the USA. In 1966, Holless Wilbur Allen invented the crossbow. 3 years later, he got a patent. Since then, the crossbow became the hottest hunting bow in the nation. Of course, it is equally popular for target shooting.

A crossbow uses a series of pulleys, cams, and cables to give the shooter more power and endurance. The crossbow allows the archer to hold back the bow string more easily. This is called the “let off.” The mechanical advantage produced can vary from 70% to 90%. If the draw weight is 60 lbs., the holding draw weight is as little as 6 pounds. This leads to more stability and accuracy.

These types of bows date back to ancient times. The earliest evidence is from the 5th century BCE. China is the likely place of invention, but ancient crossbows have been in many parts of the world. In recent times, many states are allowing the use of crossbows for hunting.

A crossbow looks like a gun and bow had a baby. The “bow” is mounted horizontally on a rifle stock. Typically, it shoots bolts, but many also shoot arrows for hunting. It is has benefitted from many innovations lately. Adjustments in design, materials, mechanics has made the crossbow into a powerful hunting weapon.

They have also gained popularity from trademark appearances in TV and film. The most iconic crossbow character is Daryl from The Walking Dead. Daryl has used 2 different crossbows in the show. In the first 3 seasons, he used a Horton Scout HD 125.

In later seasons, he used a Stryker Crossbow.

A horsebow is the original recurve bow. These types of bows were designed to be used while on horseback. These types of bows were primarily used in warfare, but there is some evidence that they were also used for hunting. The horsebow was invented in Central Asia. This area is called the Steppe and its most famous inhabitants were the Mongols led by Genghis Khan. The Mongols were some of the best archers in the history of the world. They could shoot with deadly accuracy while going full speed on horseback. 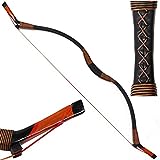 If you are new to archery, be forewarned. Bows are irresistible and addictive! Get one bow and soon, you’ll be buying all types of bows. It happens to us all.

Choosing just one is a challenge. If you must, the key is deciding on your main purpose for the bow. Are you interested in a hobby, a competition, or hunting? Every bow will require lots practice time with targets. So, all types of bows are excellent for target shooting, but not every bow is good for competition level target shooting.

Almost every bow can be used for hunting, but not every bow is good for hunting every type of prey. You can read other guides on our site for complete recommendations on choosing the best bow for you.