Taser vs Stun Gun – Which is better for self- defense? If you are asking this question, you have a better understanding of your self-defense options than most people. taser vs stun gun

Lots of people think of the stun gun and the taser as the same thing. They are NOT the same. Taser vs Stun Gun, they are 2 different products. And the differences strongly impact their utility for self-defense.

A stun gun stops an attacker in two ways:

A stun gun can prevent an attack before it happens. It is the loud crackling of the electrical current that is the most intimidating. Of course, this is for those situations where you can sense trouble coming or where there is a verbal argument that might escalate into violence against you. In those situations, brandishing the stun gun and giving a warning will deter some attackers. taser vs stun gun

The amount of voltage in a stun gun shock can be very high. It can cause a lot of pain, but it is not sufficient to disable an attacker completely. It will cause small reflexive retreats, but the attacker can choose to continue the assault. You can think of a stun gun shock like a sharp jab to the nose. It will hurt. It will cause some people to give up. But it is not a knockout punch.

The most important thing to remember about stun guns is that they require direct contact. This means that you are in the danger zone. You must be within arm’s length to make a stun gun work. If you can touch the attacker, the attacker can tough you.  taser vs stun gun

This is a reality and not necessarily a weakness. In fact, in a surprise attack where you are grabbed from behind, the design of the stun gun is the perfect tool.

A taser stops an attacker in two ways:

A Taser has a very strong deterrence factor. Almost everyone has probably seen a video of police using a taser on suspects. A taser also looks more like a firearm and is more intimidating. Like with the stun gun, the deterrence factor is only useful in situations where you can detect the danger in advance. taser vs stun gun

Yet again, when we consider the taser vs stun gun question, there is not a clear winner. For some people, the stun gun is the best way to protect yourself. For others, the taser is best.

Taser vs Stun Gun – Which One Should You Buy? 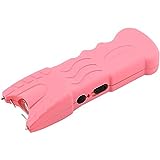 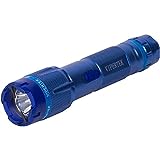 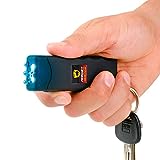 Table could not be displayed.

Stun guns are smaller, lighter, and come in a variety of designs. Today, many stun guns look and operate like other handy tools. There are stun guns that are also key chains, flashlights, and other daily items. Other stun guns have the appearance of common items like cell phones. Of course, these are only for stealth. They do not (yet) actually work as cell phones.

As mentioned above, many stun guns are built into daily use items. This makes them actually useful for non-emergency situation too.

Quality stun guns cost between $15 and $30. So, you can splurge on a high end model without breaking the bank.

Stun guns are small and light. They fit into almost any pocket or purse.

Stun guns only work at close range. Of course, as mentioned above, this could be useful in some emergency situations. However, the general rule for self-defense is to keep a safe distance is possible.

A taser gives you complete control over the attacker. It overwhelms the attacker’s nervous system and muscles. They will not be able to move or even stand when you hit them with a taser. This ensures the highest level of safety for you.

Tasers can be used at around 15 feet from the attacker. This distance could be the difference between life and death. If the attacker is much larger and stronger, you can avoid a close combat struggle that you would likely lose. Many Tasers also have probes that can be used if the attacker grabs you before you are aware of the danger. This is like the best of both worlds. You can fend off a surprise attack and get some distance. Then from a distance, you can disable your attacker completely.

Everybody knows how powerful tasers are – including criminals. Most will back off at the sight of a real Taser. The gun like appearance and reputation are extremely intimidating. This will typically allow you to avoid the actual physical confrontation.

The main drawback is the high price. The value of a taser will depend on the amount of danger that you face. If you feel that your area is more prone to violent crime, a taser is probably worth the higher price. The expense of a taser is much less than the cost of an emergency room visits. It’s much less than the pain of serious injury. It’s worth it if it can save your life.

Luckily, both are excellent options for non-lethal self-defense. Whichever you choose, the key is learning how to use it well. A little bit of practice goes a long way.

If you want to see a taser in action in slow motion, watch this video.