Streamlight is one of the top brands on the market for both high-end, affordable flashlights and weapon mounted equipment. Unlike some of the competitors such as Surefire, they haven’t branched off into other tactical gear such as pens. They continue to build what they do best, flashlights. Streamlight market themselves as “real world users”. They emphatically boast that they’ve been through firefighter training, they take low-level light shooting courses and most of all they’re outdoorsmen and they’re hunters.

Regardless of whether you’re looking for a tactical light, a headlight or a snake-style light Streamlight has you covered. Ever since I bought the original TLR-1 I’ve been a fan of their products – high quality for a fair price. The Streamlight Stinger is no exception, it’s probably their most popular tactical flashlight.

The Stinger comes in a variety of models: DS, High Performance, and High Lumen. The dual switch series (DS) has two switch locations – one on the body and one in the standard location on the tail cap of the flashlight. The Stinger high lumen (HL) is pretty self-explanatory. Instead of the standard 350 lumens that this series typically has, the HL produces 640 lumens. Ideal when you’re working in large, open dark areas.

Finally the high performance (HP) series is all about distance. It features a larger head which allows the light to travel much further (1,500 feet) compared to just 1000 feet with the standard series. The main drawback is it doesn’t flood the area as effectively as the beam is much tighter. 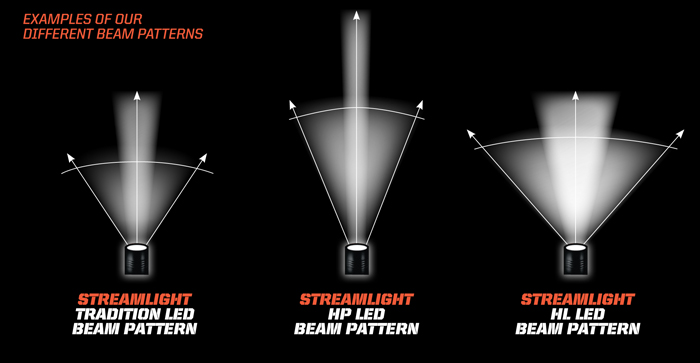 This diagram does a brilliant job of explaining the different beam types. As you can see the HL throw the most light, while the HP creates less light, but it is a more focused beam.

The series features an anodized aircraft aluminum body with an ergonomic rubber handle. Depending on the series you choose and the setting you’re running it on they will last anywhere from 1.5 to 6 hrs.

They all feature three modes: continuous on, strobe and momentary on. And as mentioned earlier the standard switch is located on the tail cap. However, the DS series (which is available for both the HP and HL lines) has two switches one on the actual body and the other at the back of the flashlight.

The stinger is 1.17″ in diameter which is a bit of a drawback. If you’re not interested in ever mounting it on a field weapon then there are no issues with the size. However, most weapon mounts are designed to fit 1″ flashlights. For the general population this will never be an issue, however, if you’re an active police officer this is something you may want to think about.

One of the other features I particularly like is the rechargeable battery option. If you’re using a high powered flashlight with any regularity you’ll be glad you don’t have to shell out additional $$ every time your battery runs out.

As a whole, this is a terrific flashlight. I wish they kept the flashlight at a standard 1″ diameter but that’s not a deal breaker. This is probably the only flashlight you’ll ever end up buying. It’s bright, it’s durable and extremely reliable. The Stinger is also one of the most versatile flashlights on the market with several different models for unique applications. Go here to check another different type of tactical and survival tools.